The economic recovery continues, as the recipe of vaccines, the reopening, and record stimulus all have combined to produce what should be one of the best years for growth ever. Although some economic indicators could be peaking or about to peak, the stage is set for this cycle of growth to continue for many years, which may surprise some investors. We discuss why inflation might be in the headlines, but still shouldn’t be a major worry for investors.

This Economic Cycle is Quite Young

The U.S. economic recovery is now in full swing. Despite the natural challenges of ramping back up, the recovery still seems capable of providing upside surprises. As a result of strides toward full reopening, rapid vaccine distribution, massive stimulus efforts, and support from the Fed, we recently upgraded our 2021 forecast for U.S. gross domestic product (GDP) growth to 6.25%-6.75%. Toss in a record number of earnings beats, resulting in S&P 500 Index first-quarter earnings growth of nearly 50% (FactSet), which is more than double the expectations at the start of the quarter, and it is clear the economy is humming right along. Last year’s 3.5% drop in GDP, the worst year since the Great Depression, is a thing of the past.

Technically, the U.S. may still be in a recession, as the National Bureau of Economic Research (NBER) hasn’t called the end yet. But considering we’ve seen various levels of output match or exceed pre-pandemic levels, it’s clear we aren’t in a recession anymore, as it likely ended last summer. Retail sales, for instance, were making new highs by June 2020 and have soared higher over the past year. NBER isn’t about being first, they are about being right, and it isn’t abnormal for them to call the end of a recession a year or more after it officially ended. We’ve found that ISM manufacturing and services data tend to peak about a year after a recession ends, and both appear to have peaked in the spring—another clue the recession ended sometime last summer.

Just because economic data is peaking doesn’t mean the new expansion is over. In fact, it’s perfectly normal to see the year-over-year levels of growth peak about a year after a recession ends, and be followed by many more years of growth. As shown in [Figure 1], the average expansion has lasted more than five years, with the last four cycles all lasting longer. The last expansion was the longest ever, making it to 11 years old before COVID-19 struck, and otherwise might have gone on even longer. However, this cycle may not last as long as the last one, as this wasn’t your average recession. Because the recession last year was likely the shortest ever (besting the six-month recession in the early 1980s) and the economy was supported by historic stimulus, some imbalances weren’t worked off like we tend to see in a normal recession. Corporate debt levels remain high, supported by low interest rates, and stock valuations never really reset. The good news is this new cycle of growth has enough going for it to be at least average, and even that would mean it still has another four years of economic growth left. There’s nothing wrong with being average! 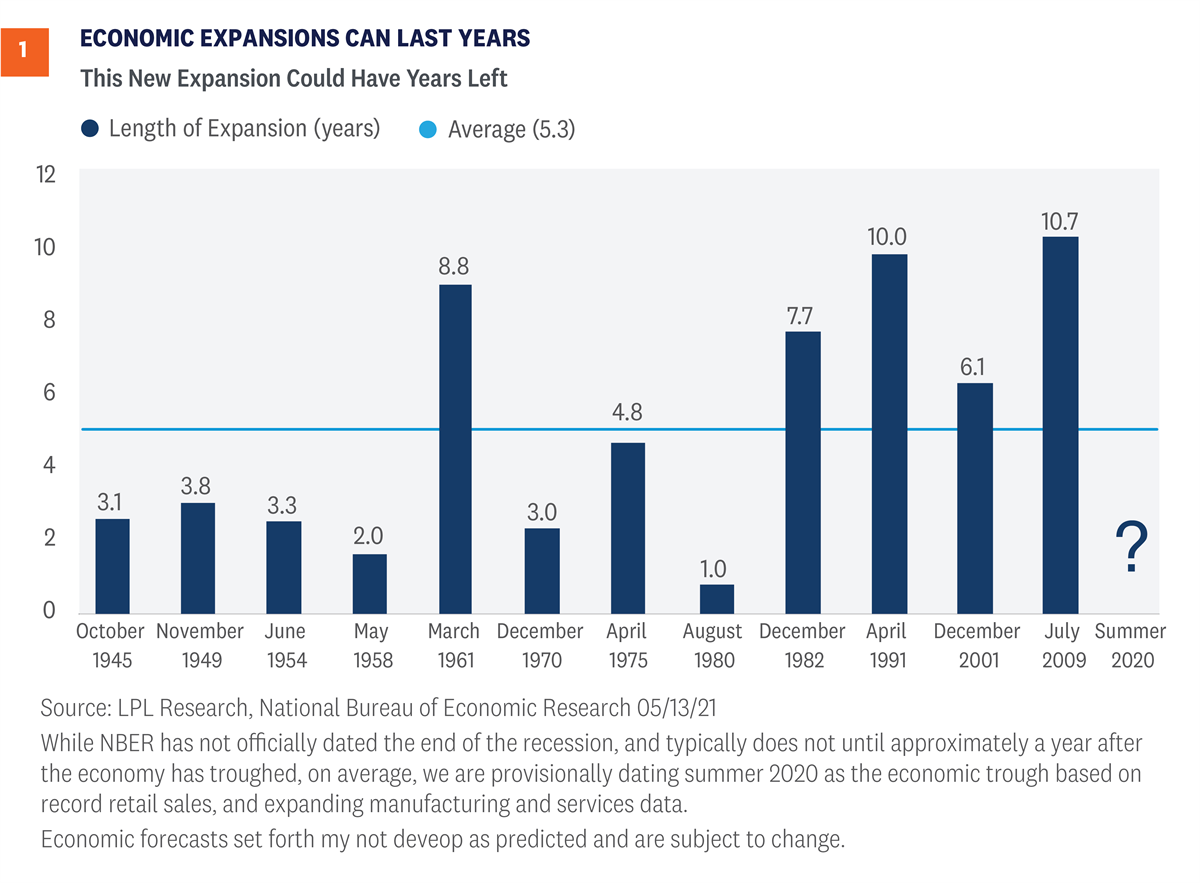 The U.S. Bureau of Labor Statistics released its monthly report on inflation on Wednesday, May 12, revealing that the headline Consumer Price Index (CPI) rose 0.8% month over month and 4.2% year over year, well above expectations. Core CPI, which strips out volatile food and energy, rose 0.9% month over month, its highest reading since the early 1980s, and 3.0% year over year, again well above what economists thought. As a result, stocks had one of their worst days in months over fears higher inflation could mean the Fed will be forced to hike rates sooner.

Here are some reasons we expect inflation to be transitory:

The economy continues to strengthen and, so far, this year is off to a better start than even the most bullish economist could have expected. There are always risks though, including COVID-19 spread outside the U.S., deficit spending, geopolitics, inflation, tax increases, and a potential policy mistake. Not to mention after a record 89% rally for the S&P 500, a well-deserved break or consolidation during a historically weak time seasonally would be perfectly normal.

But, amid a backdrop of an improving economy, massive levels of fiscal and monetary stimulus, and rising vaccination rates, we don’t expect any pullbacks to last very long, and we’d use any that appear as a buying opportunity. We upgraded our forecast for the global economy and U.S. corporate earnings in April, and last week upgraded our 2021 year-end S&P 500 fair-value target range to 4,400-4,450. We continue to recommend an overweight to equities and underweight to fixed-income position relative to investors’ targets, as appropriate.