As a result of the Senate runoffs in Georgia, Democrats are poised to take control of the US Senate, which would give them a majority in both houses of Congress. This will shift the policy outlook moderately to the left, but majorities are still razor-thin, giving moderates heavy influence. We also envision a potential move toward increased bipartisanship, which may help bring more clarity to policy in 2021.

Georgia on Our Mind

Assuming the Georgia Senate races play out in line with the current vote count, Democrats will soon have control of both chambers of Congress as well as the presidency, at least until mid-term elections in 2022. While there is a material difference between the Senate flipping to Democratic control and Republicans holding the Senate, we don’t believe it’s a radical shift.

The Democrat’s Senate majority will be razor thin, with the Senate split 50–50 and Vice President-elect Kamala Harris casting any tie-breaking vote. That means legislation will need to satisfy the most moderate Democratic Senators, such as West Virginia’s Joe Manchin and Montana’s Jon Tester. If Democrats lose votes from the left wing of their party, they will need to pull in moderate Republicans as well. With such a narrow margin, eliminating the filibuster is basically off the table. On many key legislative issues, Senate Democrats will need to muster 60 votes. The Democratic majority in the US House also narrowed significantly in the 2020 election and currently stands at 222–211 with two vacancies, creating a similar challenge.

Historically, which party occupied the White House or controlled Congress hasn’t had a meaningful impact on broad stock market performance. Policy matters—but larger economic forces are much more influential, and businesses are very good at adapting to different political environments. Having an environment where it’s easier to start or run a business can make a big difference in people’s lives, but the policy impact on markets tends to be more focused.

Markets historically have seemed to prefer divided government, whether because it removes the extremes or it encourages a spirit of compromise. At the same time, market performance when Democrats have held the presidency and controlled both the House and the Senate has been in line with longer-term historical returns [Figure 1]. The distribution of power in Washington, DC, by itself does not mean a lot, especially since voters have the chance to change the balance of power every two years. 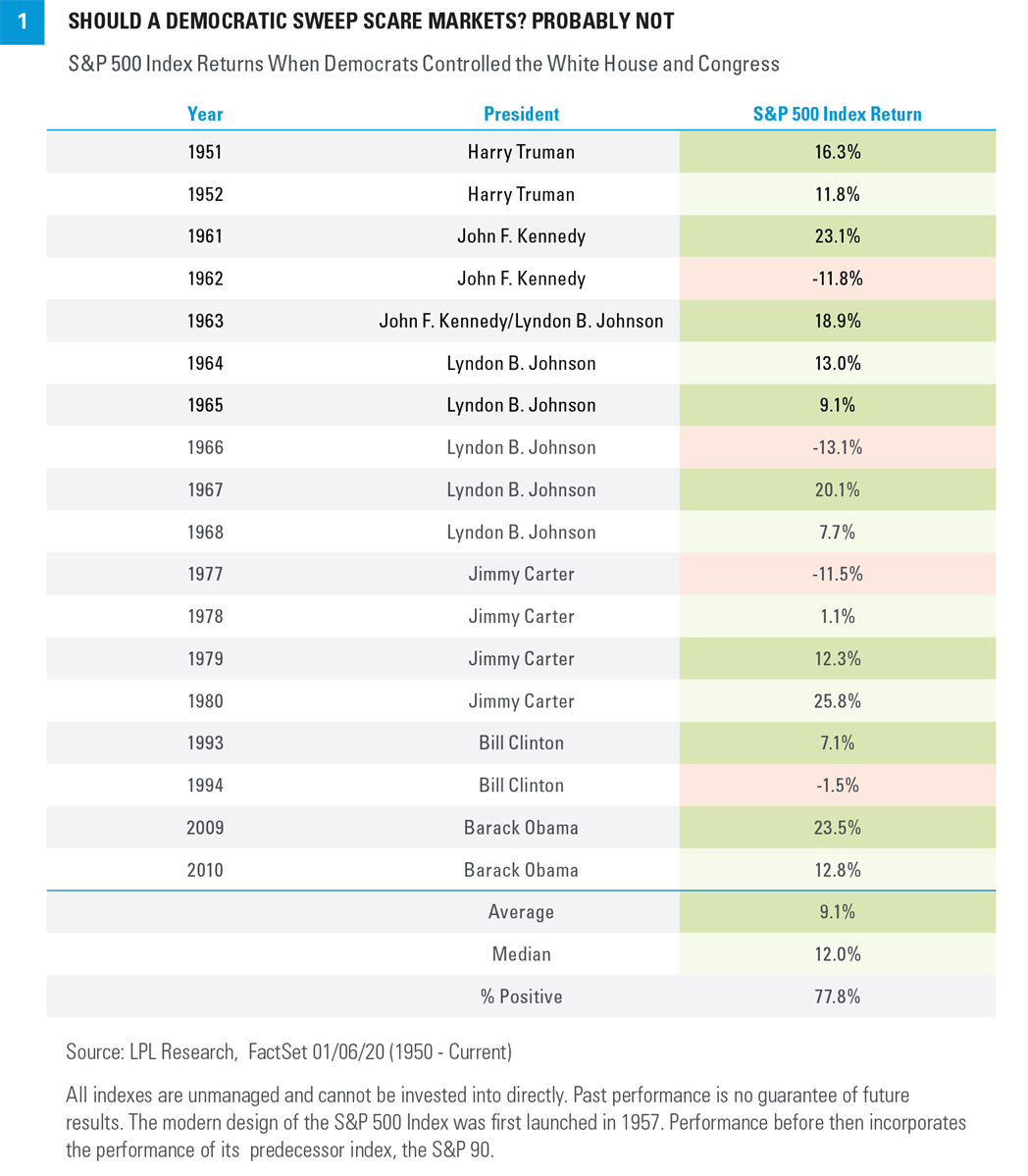 Taxes, Regulation, and Stimulus in Focus

The most important shift in policy expectations following the Georgia runoffs are around taxes, regulation, and stimulus prospects.

Taxes. Business taxes will almost certainly increase due to the new makeup of Congress. The Tax Cut and Jobs Act of 2017 (TCJA) lowered the top corporate tax rate from 35% to 21%. The top tax rate is likely to be raised to 25–27%, although the timing may be delayed depending on the economic recovery. When an increase is imposed, the hit to corporate profits potentially could be around 5%. Tax rates for the wealthy also are likely to increase and would likely take place under the obscure reconciliation process, which is how the TCJA was passed. The reconciliation process requires only a 50% majority, but the bill must be deficit neutral over a 10-year window to qualify.

Regulation. A Democratic majority in the Senate will also have regulatory implications. First, it would make it easier for President-elect Joe Biden to confirm cabinet members more tilted toward the left wing of the party. The majority party in the Senate also has considerable power to review regulation. Environmental regulations and labor standards probably will be a focus, likely reversing many Trump administration deregulatory efforts.

Stimulus. Democratic control of the Senate also will make it easier to pass additional stimulus measures, although, again, a slim majority may limit the scope. The most recent stimulus package, passed at the end of 2020, was for $900 billion. Democrats may try to pass an additional package of approximately $1 trillion or more. Passing some kind of infrastructure bill where there are some areas of bipartisan support also may become more likely. Markets are likely to applaud potential economic benefits of additional stimulus in the near term, but it also will push deficits higher and may weigh on the economy over the longer run.

The overall impact of the “before” and “after” of the Georgia elections likely will be a mixed market at best, one that probably will be small compared to more important market drivers, such as the effectiveness of COVID-19 vaccine rollout efforts and Federal Reserve policy. Higher taxes likely are the most market-negative takeaway of the Georgia runoffs, but there may be some economic offset from improved fiscal stimulus prospects, which could spur economic growth and support overall sales growth.

Growth and value equities. Improved stimulus prospects may encourage rotation toward areas of the market that may respond positively to economic reopening. This possibly could accelerate the timetable for taking a more balanced approach to the growth and value equity styles and extend the run for smaller cap stocks, although prospects of higher taxes may eventually be a headwind for small caps.

Muni bonds. If tax increases are passed, municipal bonds may also become more attractive. Higher taxes may support demand while stimulus provisions that provide aid to state and local governments can help shore up municipalities’ financials. It is likely that municipal bonds have already begun to price in this favorable environment, as municipal yields relative to Treasuries have declined more than 35% since Election Day. While this may suggest that valuations are less attractive, we would consider any cheapening to be an opportunity, particularly for high-yielding municipals.

Sector investing. Democratic control of Congress may pave the way for more thematic sector investing. We have discussed the strong run that clean-energy-themed sectors had enjoyed leading up to the election. Control of Congress could further open the door for the Biden administration to pursue green energy policies. Meanwhile, we have remained positive on the healthcare sector, and the expansion of the Affordable Care Act (ACA) may be positive for managed care stocks and the broader healthcare sector.

US dollar. The anticipated impact of higher deficits due to added fiscal stimulus could continue to put pressure on the US dollar despite already meaningful declines. Dollar weakness would support international stocks in dollar terms. Potential easing of trade tensions under the Biden administration and higher corporate taxes also would likely be dollar negative.

US Treasury yields. Our 10-year Treasury yield forecast of 1.25–1.75% for year-end 2021 remains in place. However, we have been expressing a bias toward the lower end of the range. The economic boost from fiscal stimulus shifts the bias to neutral.

We are only a week into 2021, and so far it has felt much like 2020 with an unexpected political environment. The Georgia Senate races delivered markets a surprise, and the events of January 6 were both shocking and saddening, independent of policy or party. The election outcomes have led us to adjust some of the 2021 market views we initially offered in Outlook 2021: Powering Forward, released in December 2020, but we have not made any major changes. Politics will look different than expected in December, and the policy outlook has changed. But the most important market driver likely will be the global response to COVID-19 and the momentum of the still young economic recovery.