A Recession is Here

The economy has halted for the past several weeks, and with it the longest economic expansion ever has ended, meaning we are now in a recession. What makes this recession unique is the government  intentionally brought it on, with the chances for an economic bounce back later this year high if the virus is contained. If this recession becomes one of the shortest on record, as we expect, stocks may enjoy better times ahead, as stocks historically have led the economy out of recessions.

After more than 10 years of a record expansion, the US economy likely entered recession at the end of March. The war against the COVID-19 pandemic has put a halt to our economy, as millions of workers have had to stop working or lost their jobs. This time two months ago, the economy was actually showing signs of improving, but that is on hold for now.

Although the Nation Bureau of Economic Research (NBER) hasn’t officially declared March 2020 the start of a recession, we think it is a safe assumption they will eventually. This economic expansion lasted a record 128 months, more than double the average expansion length, and topped the previous record from the 1990s [Figure 1]. Although this was the longest expansion ever in terms of gross domestic product (GDP) growth, it was fairly average, gaining exactly 50% in nominal GDP. 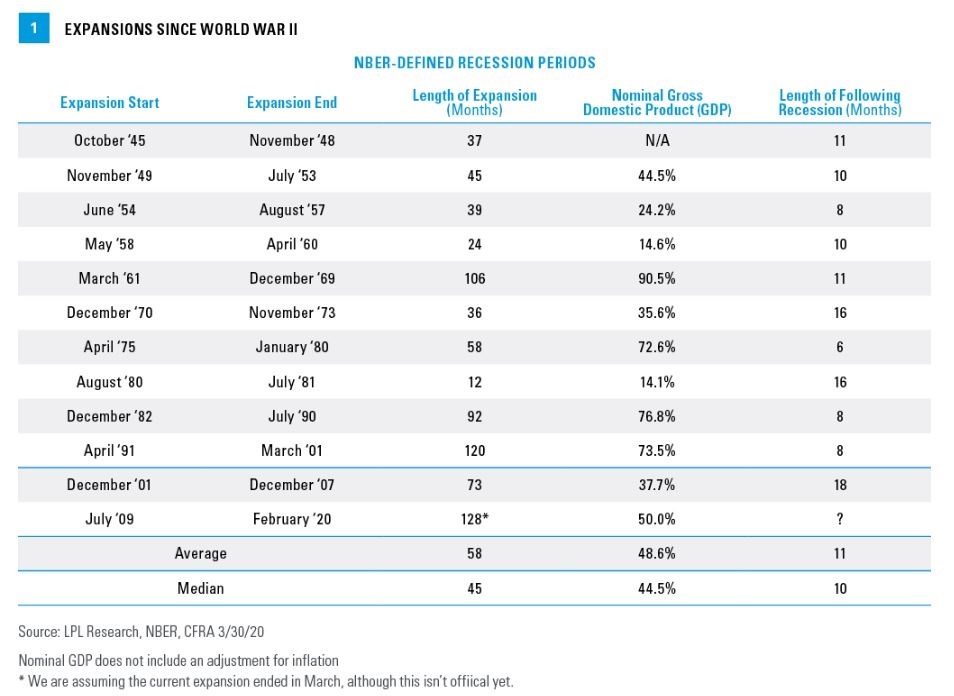 COULD THERE BE A DEPRESSION?

Some economists are predicting GDP could be down more than 30% on an annualized basis in the second quarter of 2020, which has led investors to ask if the economy could slip into a depression. Four major policy mistakes occurred after the 1929 stock market crash that together helped extend the Great Depression, including an unemployment rate still at 15% nine years after the market crash.

We aren’t seeing these same mistakes now: The Fed is easing its policy, the government is providing massive fiscal stimulus, regulations are actually being relaxed to help banks free up capital, and trade restrictions are being lightened.

NOT YOUR AVERAGE RECESSION

We’ve said before there are several ways to stop your car. You can pump the brakes gradually, slam on the brakes hard, or hit a tree. Our economy hit a tree. One thing that makes this recession so unique is it was intentionally brought on by the government by closing non-essential businesses and issuing stay-at-home policies. The near-term pain of shutting down the country for a few months has been necessary; the alternative was to take a less drastic approach and potentially risk prolonging the drag on the economy.

Since WWII, the average recession has lasted 11 months [Figure 1]. Depending on how long it takes to contain the virus, we wouldn’t be surprised if this becomes one of the quickest recessions ever. Considering the massive fiscal and monetary policy that has been put in place, with more likely on the way, there are plenty of reasons to think economic growth may be stronger later this year.

The most comparable economic scenario was the early 1980s when the Fed intentionally hiked rates dramatically to stop runaway inflation. In order to put an end to the backbreaking inflation, former Fed Chairman Paul Volcker hiked interest rates to a peak of 20% in June 1981. Inflation went from nearly 15% in early 1980 to less than 3% by 1983. There were consequences, however, as the restrictive monetary policy sent the economy into a recession, and unemployment spiked to 10%. Of course, ending inflation helped pave the way for massive growth in the 1980s and 1990s—it just took some near-term pain to get there.

Though this recession has just begun, it’s important to know what signs to watch to determine if the recession could be ending. As dark as some of the headlines have been and will continue to be, it is imperative to remember that the stock market is forward looking. In recessions since WWII, stocks bottomed about five months on average before the end of the recession, as stocks were able to look past the current negatives and sense better times ahead. In fact, the only time stocks hit a bottom again after a recession had ended 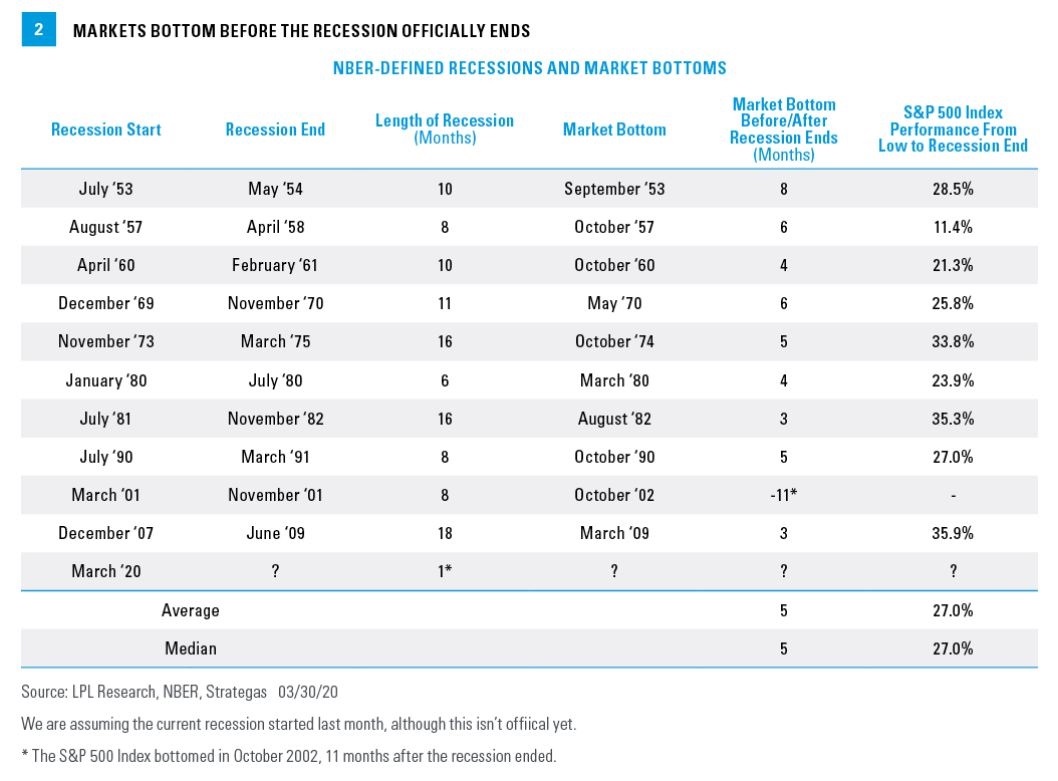 was after the tech bubble in the 1990s [Figure 2]. Additionally, stocks gained an average of 27% from the lows until the recession had officially ended. Finally, according to our friends at Strategas Research Partners, since 1970, bear market low points have occurred within an average of three weeks of the biggest increase in weekly jobless claims, something we hope took place the week ending March 27, when a record 6.8 million people applied for unemployment benefits.

No one knows for sure when stocks will bottom or when the current recession might end. The good news is many data points suggest we are nearing that low point, and we are on a path to finding a way to remove this recession’s catalyst.

We are close to getting clarity on a peak in new COVID-19 cases in the United States, a key signal for us that the market lows may be in place. We continue to believe this may be a suitable time for long-term investors to consider adding more equity exposure in their portfolios where appropriate. But as we noted last week, more tactical investors may want to wait for a potential retest of the March 23 lows, as most previous major market crashes experienced a return to prior lows before beginning the recovery. A more attractive entry point may present itself soon. We will continue to follow our Road to Recovery Playbook to gauge progress on the market’s bottoming process.

All information is believed to be from reliable sources; however LPL Financial makes no representation as to its completeness or accuracy. Please read the full Outlook 2020: Bringing Markets Into Focus publication for additional description and disclosure.